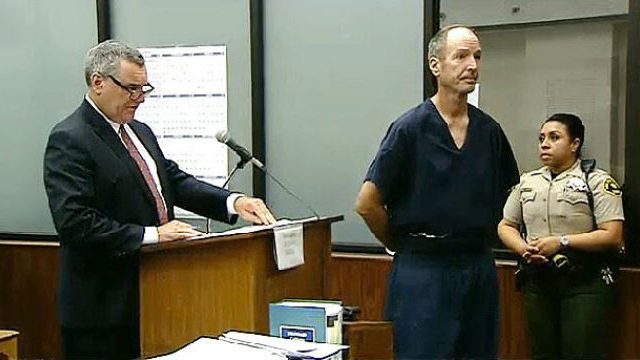 A house painter who ambushed and shot a TV sportscaster who had hired him to work on his Scripps Ranch house was sentenced Wednesday to nearly 39 years to life in state prison.

Mike Montana, 55, was convicted last month of premeditated attempted murder for shooting Kyle Kraska, the sports director at CBS News 8. A jury also found the defendant guilty of making criminal threats against two other people in 2012 and 2014.

“Your bullets may have hit their mark, but they did not kill my spirit,” Kraska told Montana, adding that the defendant’s “vicious, brutal and cowardly act only made me stronger.”   Kraska asked Judge Michael Smyth to show Montana the same kind of mercy that he  showed Kraska when he shot the victim at least five times and left him to die.

He reminded the judge that when Montana was told that Kraska might not survive the shooting, he told sheriff’s deputies, “Good. He deserved it.”

Kraska hired Montana in October 2014 to paint the exterior of his home for $3,000. The victim said Montana walked off the job when Kraska refused to give him more money than the original $800 down payment. Kraska said he had agreed to pay Montana the remaining $2,200 when the job was complete.

Deputy District Attorney Rebecca Zipp told the jury that Montana “mechanically tried to kill Kyle Kraska” as the sportscaster got in his car to leave for work about 3 p.m on Feb. 10, 2015.

About a week before the shooting, Montana left a note under Kraska’s doormat that read, “It’s in your best interest to pay me the money that you owe me.”

The day of the attack, Montana waited for Kraska to get in his Mercedes- Benz, then walked up to the car and shot out tires, fired into the engine, and shot Kraska, the prosecutor said.

Defense attorney Richard Jayakumar told the jury that Montana didn’t form the specific intent to kill and was intoxicated that day from a barrage of prescription medications that he began taking after two back surgeries dating back to 2011.