Shirley Gibson isn’t quite sure how to feel about these numbers.

As directing attorney of the Legal Aid Society of San Mateo County — which offers legal services to low-income tenants caught between the preposterously priced southern suburbs of San Francisco and the preposterously priced suburbs of Silicon Valley — she’s seen firsthand how California’s housing affordability crisis has overwhelmed her clientele.

Rents in San Mateo County have increased nearly 55% since the start of the decade. A two-bedroom in Redwood City, the county seat, now goes for $3,500, according to data from Apartment List. Strong demand, fueled by the influx of high-income tech workers, means vacancy rates are low.

“I don’t know what a normal housing market is anymore,” said Gibson. “There’s a tush for every seat right now. You can rent any unit you want within a week.”

Theoretically that should have swelled the ranks of tenants needing her to defend them in eviction court. Ever-escalating rents should make it harder to pay rent on time, and delinquent payments are the most common reason a landlord sues to remove tenants from their property. Cutthroat demand presumably would spur landlords to evict more readily, knowing they won’t risk months of lost revenue in a post-eviction vacancy.

Yet eviction lawsuits against San Mateo renters from 2010 to 2018 dropped nearly 50%.

“This year is going to be the lowest you’ve ever seen,” said Gibson. “I don’t have a perfect explanation for why that is the case.”

It’s counterintuitive amid a worsening housing crunch, but it’s happening statewide.  While the median rent in California increased 23% between 2011 and 2018, the number of times California landlords sued their tenants to evict them dropped by nearly 40% over roughly the same period, according to data collected by UCLA researchers.

Two crucial caveats: Those dropping numbers nonetheless represent a significant number of California renters facing the prospect of a court-ordered eviction — landlords initiated more than 137,000 of them in fiscal year 2017. And there’s no data on evictions that don’t end up in court, although researchers estimate they’re about twice as common as those that do.

Still, the data shows a steep and steady drop in eviction court cases this decade in every sizeable county — with cases diminishing more in some of the priciest areas.

“It’s a puzzle that I’m not sure we have an answer to,” said UCLA eviction researcher Kyle Nelson.

Are landlords simply expanding efforts to evict tenants outside the courts? Have attempts to beef up legal aid to low-income residents paid off?

Neither academics nor landlords nor tenants can say definitively. But here are some of their best guesses.

Evictions Outside Court Could be Rising

An unfavorable court judgement hangs an enduring legal albatross on renters — what some have termed “the Scarlet E.” In California, evictions stay on a tenant’s rental history for seven years, during which it becomes incredibly difficult to find another place to live.

But eviction lawsuits are one of the few forms of eviction that actually leaves a data trail. And that only happens if a renter stays in an apartment after being served with an eviction notice, forcing a landlord to go to court.

Landlords have plenty of other options. California doesn’t know how many families move out after a “three days to pay rent or quit” sign is affixed to their door, let alone how many strike “cash for keys” arrangements or other informal agreements to leave. (If a renter moves out because the rent is raised, that’s not an eviction).

Eviction researchers say even absent data, there’s good reason to think these undocumented evictions could be on the upswing. High rents and low vacancies mean landlords may be more willing to waive delinquent rents, buy out tenants or otherwise induce or threaten them, to get them to leave.

“Say there’s more rent increases and more tenant harassment, and either way a tenant has to move,” said Aimee Inglis, program director with Tenants Together, a statewide renter advocacy group.

Gibson, the San Mateo tenant attorney, says she’s seen a dramatic uptick in “no-fault” evictions over the past decade, even as court cases have declined. Until a new California eviction protection was passed in 2019, landlords could force renters to leave after their leases expire without giving a specific reason why, as long as they’re given 30 or 60 days notice.

Why have landlords used “no-fault” evictions?

Say a landlord suspects a tenant is dealing drugs on their property, but lacks proof. If the tenant fights that in eviction court, the landlord could very well lose. But if the landlord simply sends a “no-fault” notice that a tenancy will end in two months, the renter is typically out of options.

“Instead of these fault-based cases, we’re getting these much harder to defend no-fault types of cases where legally they are harder to wrangle,” said Gibson.

In 2013, roughly half of the eviction notices clients brought to her legal aid clinic were “no-fault” lease terminations. By 2018, that share had increased to 75% — a more common reason than non-payment of rent.

There’s no statewide data on the number of “no-fault” notices. Reports of their prevalence have surged in recent months because a new state law is about to restrict them. After Jan. 1, most landlords will be required to cite one of several acceptable reasons for evicting a tenant.

As the Great Recession of the late 2000s ravaged California’s economy and housing market, eviction lawsuits spiked. Adding to the misery of unemployment reaching levels not seen since the Great Depression, banks and corporate landlords frequently served eviction notices to families who lost their homes in foreclosures. The result: nearly 230,000 eviction court cases in fiscal year 2010.

Landlords say eviction lawsuits also increased during that time because the same population most vulnerable to foreclosures — families with shoddy credit histories and incomes too small for their mortgages — were likely to miss rent payments after they moved from foreclosed homes into rentals.

“You had individuals with bad credit, maybe not a lot of assets, and they moved into apartment complexes,” said Chris Evans, an attorney with the firm Kimball, Tirey and St. John, which represents landlords in more than 15,000 eviction lawsuits a year. “Inevitably those individuals, with the economy struggling, faced evictions as well.”

But Nelson, the UCLA researcher, says that the state’s economic recovery is only part of the story. In L.A. County, the highest recorded number of eviction lawsuits were actually filed in the early 2000s, during the comparatively much milder recession associated with the dot-com bust. Eviction rates in the mid 2000s were higher in many Southern California counties than they are today, despite cheaper rents.

Most mysteriously, eviction lawsuits have continued to drop years after the state emerged from recession, even while rents have outpaced gains in renters’ incomes.

Legal Aid for Tenants Has Been a Factor

Tenant groups and landlord lawyers agree that over the last decade, it’s become a lot more expensive to take a renter to court.

“Because of the cost of eviction, landlords really started working to avoid it,” said Evans.

He estimates that a decade ago, his firm’s landlord clients spent under $1,000 to get rid of a tenant who contested an eviction. That included attorney fees, court filing fees, sheriff lockout fees and other costs — all costs renters risked having to pay if they lost.  In the vast majority of eviction lawsuits, tenants represent themselves.

Now, if the renter takes the case to a jury trial — an option tenants have increasingly threatened over the last decade on the advice of counsel, says Evans —it costs his clients between $10,000 and $15,000. And a jury trial is a gamble for landlords. 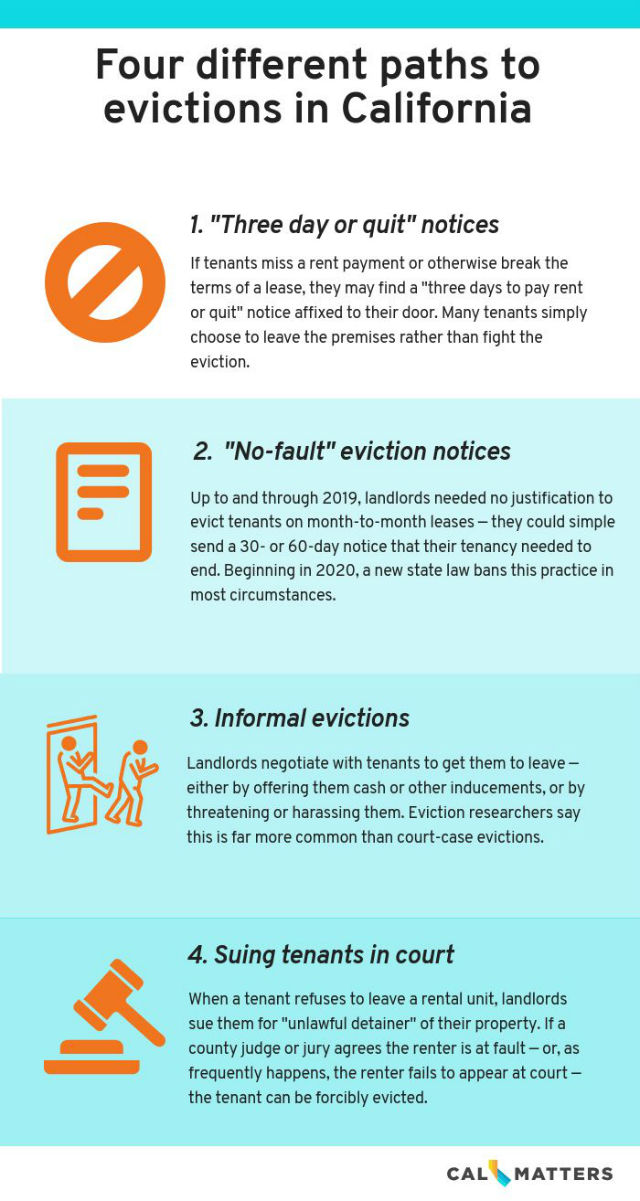 Tenant attorney Gibson cites San Mateo as an example of how expanded tenant legal services can change landlords’ eviction calculus. Her legal aid organization, buoyed by increased philanthropic support, has seen its practice expand from a one person team to a six-person team over the last 12 years.

“Suddenly there’s more lawyers in the community, more defense to (court eviction proceedings), so it’s getting harder and more expensive for landlords,” she said.

As a response to the foreclosure crisis, in 2009 state lawmakers created low-income legal aid pilot programs in several high-cost counties. An independent evaluation found that renters represented by state-funded attorneys were nearly 20% less likely to lose by “default judgement,” where landlords win simply because a renter doesn’t show up to court.

As recently as a decade ago, the process for screening a rental application was fairly basic. Landlords ran a potential tenant’s credit report, and that was pretty much it.

Fueled by technological innovations, the screening services are fairly cheap — $50 gets you a lot of info.

“It’s just a much better picture of a resident’s ability to pay prior to them moving in,” said Cynthia Wray, who’s been in the apartment management industry for nearly three decades. “And we just didn’t have that 12 years ago or more, and I think that’s made a huge difference.”

Corporate landlords and real estate investment trusts, who over the last decade have snapped up a sizable chunk of California rentals, are major utilizers of sophisticated screening services. As opposed to “mom and pop” landlords who might own one or two properties, investment firms have rigid rules about who they will and won’t accept as tenants.

Possibly. That appears to be exactly what happened in Washington D.C.

Much as in San Francisco or Los Angeles, the cost of living in Washington D.C. exploded over the last two decades. At the same time, eviction lawsuits steadily dropped while the city’s low-income housing stock shriveled as neighborhoods gentrified.

“As DC got more expensive, it got too expensive for people to rent if there was any chance they had any financial problem,” said Maya Brennan, senior policy associate at the Urban Institute. “So renters with low incomes have either been pressed out over the past ten or so years, or pressed into a ‘shadow rental market’” — when tenants live in warehouses or garages not sanctioned as legal dwellings.

That logic could extend to California, which for nearly two decades has lost more residents than its gained from other states — an exodus fueled by Californians making less than $50,000 a year.

But many more of those low-income Californians simply moved to cheaper places in-state. Bay Area rent refugees have flocked to the more affordable climes of Sacramento and Stockton. Los Angelinos are retreating to Riverside and the Inland Empire.

You’d expect eviction suits to tick up in those counties as more vulnerable renters move in. But they haven’t.

Michael Lens, an urban planning professor at UCLA, recently tried to determine what made one Southern California neighborhood more likely than another to see landlords initiate formal evictions. One hypothesis: gentrification.

“The conventional wisdom is that landlords will be more aggressive in trying to push people out…when they think they can get somebody who will pay more,” said Lens. “But that’s not what we find, on the court side of things.”

Despite lots of national publicity in recent years, eviction research is still in its infancy. Which means a definitive answer for California’s counterintuitive trend may not surface for awhile.

“Evictions are incredibly complex, and the world of people thinking about them deeply expanded dramatically over the past couple years,” said Brennan. “But the number of people with enough regionally specific knowledge has actually not increased that much.”

California Housing Crisis Mystery: Rents Are Up, But Eviction Filings Are Down was last modified: December 30th, 2019 by Editor