Midwest Television, operators of KFMB-TV/Channel 8, will launch its “The CW San Diego” station at 12:01 a.m. on Wednesday, May 31. Midwest will operate both KFMB, a CBS network affiliate, and The CW San Diego as a duopoly in the San Diego market.

Viewers will see The CW San Diego on Channel 6 on several cable TV and satellite systems, including Cox, Spectrum, Dish Network and AT&T U-Verse. The station also will be seen on the following channels: Cox and U-Verse 1006, Spectrum 1212, DirectTV Channel 9, Dish Network 8794 and over-the-air on Channel 8.2.

“We are thrilled to be adding the CW to the KFMB family,” said Alberto Mier y Terán, president and general manager of the KFMB Stations. “It enhances our strong multimedia platform in San Diego and helps us to better serve all San Diegans with compelling programming and award winning local news.”

Programming on Channel 6 also will include newscasts produced by KFMB-TV. The newscasts, branded as “News 8 on The CW San Diego,” will air weekdays from 7 to 9 a.m., 7 p.m. and 10 p.m.

“We’re really excited to put the same quality of CBS News 8 onto our new CW affiliate,” said Dean Elwood, News 8 news director. “Now San Diego viewers can get the news they love at a time that’s convenient for them, no matter which station they choose.”

Midwest acquired the CW network affiliation earlier this year from XETV, operated by Mexico-based Bay City Television. Launched in early 1953, XETV-TV was San Diego’s second-oldest TV station behind KFMB-TV, which signed on the air on May 16, 1949. Over the years, XETV had been a network affiliate for ABC, Fox and CW (since 2008).

The San Diego County Taxpayers Association, a watchdog organization that promotes accountable, cost-effective and efficient government, has announced nominees for its 2017 Media Watchdog awards. The awards recognize news media journalistic efforts that expose misuse of taxpayer dollars. Media Watchdog awards are among the association’s Golden Watchdog and Fleece Awards that recognize the best and worst in local government spending, decision-making and efficiency.

The awardes will be presented on May 25 at the Hard Rock Hotel.

Carl DeMaio, KOGO News Radio 600-AM afternoon weekday talk show host, and Dave Stall, host of weekend morning automobile segments on KUSI-TV and co-host of the “Gun Sports Radio Show,” were honored at the PAC’s recent Second Amendment Gala that drew more than $100,000 in contributions and a sold-out crowd of 465 people at the Hotel Del Coronado.

DeMaio was presented with the MVP of the Year award. Stall, along with show co-host Lance Pelky, received the Media Player of the Year award. Both DeMaio and Stall are avid Second Amendment advocates, said Michael Schwartz, executive director of the PAC. “Our right to bear arms and our fundamental right to self-defense are aided by media personalities who believe strongly in the Second Amendment,” Schwartz said. “We’re grateful for their support.”

Gun Sports Radio airs from 4 to 5 p.m. Sundays on KCBQ-AM 1170 The Answer. Listeners include people who own firearms for recreational shooting as well as personal protection. Founded in 2015, the Gun Owners PAC is a registered political action committee and advocacy organization focused on organizing the gun industry and community and protecting the Constitution’s Second Amendment right to bear arms. While every state has a Second Amendment PAC, along with several nationwide gun rights PACs, the San Diego organization claims to be America’s only local, countywide Second Amendment advocacy organization.

(W)right On Communications Adds University of Redlands as Client

Solana Beach-based (W)right On Communications has partnered with the University of Redlands to share the stories about its alumni, students and personalized learning programs. 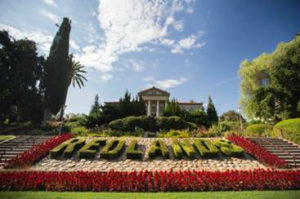 The private, nonprofit liberal arts school based in the Inland Empire educates over 5,000 graduate and undergraduate students annually with one in 10 members of its freshmen class last fall drawn from San Diego.

In addition to a scenic 160-acre campus in the foothills of the San Bernardino Mountains, the university operates seven regional campuses across Southern California offering degrees in business and management to working professionals. Its San Diego campus is located at 2020 Camino Del Rio North in Mission Valley.

The San Diego Nonprofit Association will present a workshop on marketing strategies for nonprofits from 7:30 a.m. to noon on  Wednesday, May 24, at UCSD Extension, Room 317, at 6256 Greenwich Drive. Several local professional communications groups are supporting the workshop, including the American Marketing Association San Diego chapter, Public Relations Society of America, SD Direct and SDX. The workshop is designed for communication professionals who work with nonprofits.

MarketInk: KFMB Launches The CW San Diego on Channel 6 on May 31 was last modified: May 22nd, 2017 by Editor