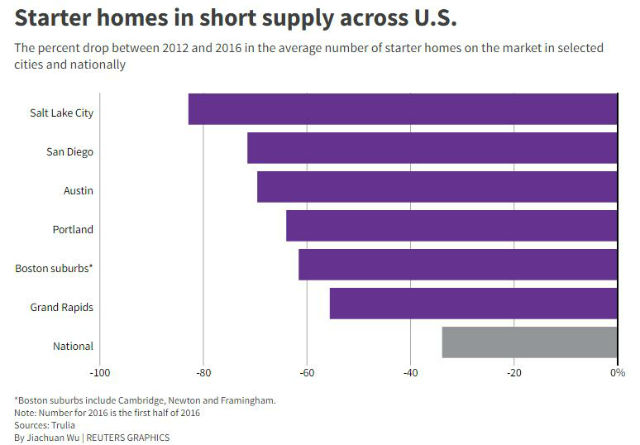 Seeking a yard for her two dogs and proximity to her new government job, Alison Owen set out to buy a home this spring in the hot market of Austin, TX.

Owen’s real estate agent warned the 28-year-old that she would face stiff competition in the market for entry-level homes — and he wasn’t kidding.

Owen had to offer $215,000 for a property listed at $198,000 to fend off at least nine other bidders for the 1,200-square-foot home in the sought-after neighborhood of Wells Branch.

“I definitely spent a lot more than I thought I was going to spend,” Owen said.

Similar scenarios are playing out in San Diego and across the United States. Low interest rates and an improving job market have created a wave of prospective first-time home buyers, but they’re being stymied by a dearth of available starter homes.

Nationwide, the inventory of homes costing $250,000 or less fell more than 12 percent between June 2015 and June 2016, according to the National Association of Realtors.

The shortage stems from higher labor, land and building permit costs that have caused construction companies to focus on higher-end homes that bring more profit. In addition, institutional investors are snapping up affordable homes by the thousands in select markets nationwide and converting them to rentals.

The shrinking supply of affordable homes is one economic trend among many that is conspiring against younger workers and families in building wealth as their parents once did.

Real average hourly wages of often debt-laden college graduates fell between 2000 and 2014, according to the Economic Policy Institute, while the Case-Shiller U.S. National Home Price Index jumped more than 25 percent, adjusted for inflation, over the same period.

Younger workers who can afford to save for a down payment, meanwhile, are forced into bidding wars for the dwindling number of houses they can afford. Some decide instead to strain their budgets for a home that would have been traditionally considered a trade-up.

Over the past four years, the number of entry-level homes for sale — defined as those priced in the lower third of a local market — has fallen by 34 percent, according to a Reuters analysis of data compiled by listings firm Trulia.

The market is even tighter in many cities. In Salt Lake City the average number of starter homes on the market has fallen by 83% since 2012, and in San Diego by 71.5%. Cambridge, Mass. and Portland Ore. have both seen drops of more than 60%.

Between 2006 and 2014, the number of single-family homes occupied by renters jumped by about 34 percent, according to the U.S. Census Bureau, a shift that had its roots in the subprime mortgage crisis.

After the housing crash, institutional investors rushed to buy undervalued and foreclosed homes and convert them to rentals.

Corporations or companies now own nearly one fifth of all homes priced under $300,000 that are not occupied by their owners, according to property data firm ATTOM Data Solutions, though investor purchases have slowed since peaking in 2013.

At least five publicly traded real estate investment trusts in the U.S. exclusively own single-family rental homes. American Homes 4 Rent — which began trading in 2012 and is currently the largest publicly-traded REIT dealing in single-family homes — owns nearly 38,000 properties in more than 20 states. Its shares have risen more than 40 percent in the last year.

The REIT was founded by self-storage billionaire B. Wayne Hughes, and top shareholders include The Vanguard Group and J.P. Morgan Asset Management, according to public filings.

Meanwhile, Blackstone Group in July announced plans for a public stock offering of Invitation Homes — now the largest U.S. single-family home rental company. Blackstone has invested $8.7 billion in its 45,000-home portfolio since founding it in 2012.

Laura Medina, 25, a human resources manager who attended a recent grand opening of a starter-home community in Jurupa Valley near Riverside, said she has lost bidding wars over six months of looking for a home for herself and her son.

“There are a lot of investors out there,” she said.

The promise of a stable income from increasing rents has also turned many individuals into “accidental landlords” who rent out their homes when they move rather than sell them, according to NAR economist Lawrence Yun.

The growing number of renters makes investing in rental housing attractive. Young adults aged 18 to 34 earn $2,000 less per year today than they did in 1980, after adjusting for inflation, according to the Census Bureau, and they have amassed record levels of student debt.

Outstanding student loan debt totaled $1.2 trillion in the fourth quarter of 2015 — trailing only mortgage debt among all consumer debt categories, according to the New York Fed. The average student loan monthly payment has jumped 50 percent in constant dollars, to $351, over the last 10 years.

Both factors have contributed to young people entering the housing market later. A survey released in June by the NAR found that 71 percent of non-homeowners who carry student debt said it had delayed them from buying a home.

As individual and institutional landlords have siphoned off rentals at the low end of the market, new construction has been slow to meet the demand from homebuyers.

As of June, housing starts on single-family homes were on track to hit 778,000 this year, far below levels of more than a million starts per year during the 1990s and early 2000s.

That’s in part because new home construction remains depressed coming out of the recession, when builders retreated and many construction workers found other lines of work.

Average residential land values are up about 79 percent over the last four years, to a level last seen when the housing market peaked in 2007 and 2008, according to the Lincoln Institute for Land Policy.

The cost of building a new home, including permit fees, labor and materials, meanwhile, has jumped to 61.8 percent of the cost of an average single-family home, compared with 48.1 percent in 2007.

First-time buyers make up 32 percent of Pulte’s business today, down from 40 percent just five years ago. And the company has refocused its entry-level homes at a higher average price of about $350,000, targeting more affluent, urban buyers.

“We don’t see a lot of value today in running out into the exurbs and buying a lot of lots,” PulteGroup Chief Financial Officer Bob O’Shaughnessy said at an investor conference in May.

If there’s another housing downturn, he said, “that is the stuff that will shut down first.”