The San Diego Padres ball club is switching bases next year for its game-day radio broadcasts, leaving an all-sports AM station, XPRS-AM “The Mighty 1090,” for an alternative-rock FM station.

Entercom San Diego recently announced it will air all 162 regular season games in 2017, along with select spring training games, on KBZT-FM 94.9-FM.

“Baseball is a great fit for our millennial audience on FM 94/9,” said Bob Bolinger, Entercom San Diego market manager. “It’s an opportunity to freshen all elements of the broadcast to attract more of the casual fans while still appealing to the baseball purists.”

“At the heart of this partnership is our desire to evolve broadcasting with live sports, great music and new ways to engage with new and existing fans,” said Pat Paxton, Entercom president of programming.

A Padres spokesperson declined to comment on Entercom’s announcement. XPRS-AM, operated by Broadcast Company of the Americas (BCA), has remained a Padres’ radio rightsholder since Petco Park opened in 2004. XPRS will continue airing Padres game for the remainder of the 2016 season.

In addition to FM 94/9, Entercom Communications Corp. operates two other stations in San Diego, including KSON 97.3-FM and 92.1-FM and KIFM-FM Sunny 98.1-FM.

The National Academy of Television Arts & Sciences‘ Pacific Southwest Chapter has announced the nominees for its 42nd annual Emmy Awards. The Emmy Awards recognize outstanding achievements in TV and allied media. Awards will be presented Saturday, June 11, at the Westin Mission Hills Resort and Spa in Rancho Mirage.

More than 900 entries, a record for the local 550-member chapter, were received, according to Donn Johnson of KPBS-TV, who is serving as 2016 Pacific Southwest Chapter president.

Marketing firm Allison + Partners, with 23 offices worldwide, has announced has rejoined the San Diego office as an account manager. The announcement was made by Scott Pansky, Allison + Partners co-founder and senior partner. 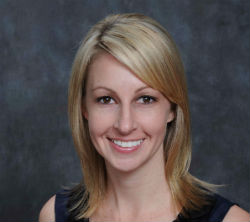 She spent the past five years working with Nuffer, Smith, Tucker, a San Diego public relations firm, and was previously with Allison + Partners from 2007 to 2010.

As a board member with the Public Relations Society of America’s San Diego-Imperial Counties chapter, she is co-chairing this year’s Edward L. Bernays Mark of Excellence awards program.

The San Diego Press Club will host Lee Burdick, former legal adviser to San Diego Mayor Bob Filner, for its upcoming “Newsmakers” program from 5:30 p.m. to 7 p.m., Tuesday, May 10, at Dobson’s Bar and Restaurant in the Spreckels Theatre building, 956 Broadway Circle in downtown San Diego. Cost is free. The public is invited to attend. For more info, contact Terry Williams at (619) 231-4340 or sdpressclub@cox.net.

Four years ago, Burdick left her legal practice and a seat as a Port Commissioner to join newly elected Mayor Bob Filner’s office as legal adviser and head of special projects. Today, the resident of Arizona is the author of a tell-all book about Filner’s decline and fall in the wake of a series of sexual harassment allegations.

“This was a terrible chapter in many lives, mine included, and one that everyone in the city of San Diego might prefer to forget,” said Burdick. “By revisiting it and keeping the dialogue going, I hope to help eliminate sex harassment in the workplace, especially in our most powerful political offices.”