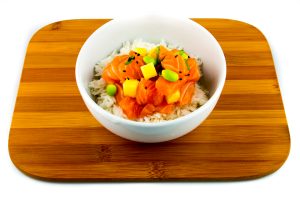 A San Diego business owner is taking a beloved childhood dish to the next level.

Yohei Umezu, owner of the popular San Diego Poke Company, which can often be found at the neighborhood farmers’ market, is opening his first brick and mortar location in Mission Valley this weekend.

The company, which opened just last year, has quickly grown into a farmers market favorite among patrons who enjoy noshing on the Hawaiian dish that typically includes raw fish.

Umezu, 37, who previously dabbled working in different industries, said he decided to take the leap into the restaurant industry after seeing a lack of poke restaurants in San Diego County.

“I’m not a professional cook but I’ve always cooked poke and enjoyed mixing it with different sauces and ingredients,” Umezu said. “When I came to San Diego, I saw that there weren’t any good poke restaurants.”

Umezu, who grew up in Los Angeles, said poke restaurants are common in his ultra-diverse hometown but the opposite existed in San Diego.

“We decided to try it out at the farmers’ market and there were a lot of people who didn’t know what poke was,” Umezu said. “Over time, customers became die-hard fans.”

After gaining a fanbase, Umezu said he decided to search for a brick and mortar location to further share his love for the Hawaiian dish. He ultimately settled on Mission Valley because of the traffic flow.

The former electrician said he hopes to see his company grow to open two more locations in the next five years.

“We’ve done a lot to bring something that was missing in San Diego,” Umezu said. “We’re improving on the concept every day and we hope to make people happy. It’s been a great ride so far.”

The casual eatery will open at 10387 Friars Road on Sunday. Poke dishes range from $10 to $12. The first 100 customers will receive one free build-your-own poke bowl.

For more information, go to www.sdpokeco.com.