A year ago, in October, News Radio KOGO 600-AM revised its weekday programming lineup to add more local news, including newscasts during the noon hour and from 4 p.m. to 7 p.m.

Now, the iHeartMedia station has dropped three hours of newscasts and added conservative talk show host Sean Hannity’s nationally syndicated show from noon to 3 p.m. “The Sean Hannity Show” is followed by Carl DeMaio’s “DeMaio Report” from 3 p.m. to 6 p.m. and the “KOGO Evening News,” hosted by Ernie Brown, from 6 p.m. to 7 p.m. Brown then hosts his own talk show until 9 p.m.

In September, after a 10-year run, KFMB 760-AM dropped Hannity and added the “KFMB News Hour” from 2 p.m. to 3 p.m. with Lynda Martin and CBS8 TV anchor Carlo Cecchetto.

“We are extremely excited about our new line-up and the addition of Sean Hannity to our team,” said Melissa Forrest, market president, iHeartMedia San Diego. “News Radio 600 KOGO has experienced tremendous ratings growth in the past year and we anticipate these new changes will help evolve our programming to the next level.”

The Hannity show is heard on more than 500 affiliates.

A tiger cub now living in Alpine has been named Himmel in honor of TV personality Larry Himmel, who passed away in 2014.

The skinny, two-month-old male cub was found wandering the streets of Hemet, and was taken to a shelter operated by San Jacinto County. Later, California Department of Fish and Wildlife officials sent the cub to Lions, Tigers & Bears, a federally and state licensed big cat and exotic animal rescue sanctuary that occupies 94 acres in Japatul Valley, east of Alpine.

Himmel the tiger cub arrived in Alpine weighing 27 pounds and has been steadily gaining weight with a diet of raw chicken, meat and supplements, according to Bobbie Brink, founder and director of Lions, Tigers & Bears. “We’re not sure of its exact subspecies at this point,” said Brink. She said the cub could grow to be 500 pounds and live 20 years. 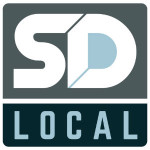 “With both organizations focused exclusively on the San Diego market, this partnership gives us the resources to deliver even more localized programming, events, contests and promotions to our advertising partners and the San Diego community,” said Gregg Wolfson, vice president and general manager at Local Media  San Diego.

“Local, independent broadcast companies are facing increased pressure from national competitors, but they can’t rival our years of experience serving San Diego,” said Elisabeth Kimmel, owner and president, Midwest Television, “I’m eager to put our combined experience and assets to work for our customers across the region.”

Station officials said the number of local listeners available to advertisers as a result of joint agreement is about 1.5 million.

Cost to attend is $149 per person for members, $249 for non-members and $99 for students. For more information, visit www.sdama.org.

AMA’s previous Art of Marketing conference was held in January of this year.