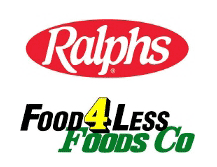 “We are continually amazed by the generosity of our customers and associates to help the less fortunate,” said Kendra Doyel, senior manager for community affairs at Ralphs/Food 4 Less. “Our fundraising efforts will have a measurable impact in the fight to end hunger in our community.”

The funds were raised through Ralphs and Food 4 Less’ annual holiday “Bringing Hope to the Table” campaign that provided customers with an opportunity to donate at each checkstand from Nov. 10 to Jan. 31. In addition, customers shopping at Ralphs stores in Southern California were also able to make monetary donations to end hunger by purchasing “Bringing Hope to the Table” scan cards.

Ralphs and Food 4 Less are both subsidiaries of The Kroger Co.,  one of the nation’s largest grocery retailers.

— From a Ralphs/Food 4 Less press release