Impeccable elegance are the words that may be used to describe the gala grand opening weekend of The Conrad, the La Jolla Music Society’s new musical and cultural center bringing heart and soul to the center of the storied village.

Inaugural concerts and building dedications almost never get it just right–but not this time. The highest quality—due to architecture, sound design and musical performance–was exactly what was on offer in the courtyard and inside the magnificent new Baker-Baum Concert Hall of The Conrad Prebys Performing Arts Center on Friday night and throughout the weekend.

The entire complex has been named in honor of the late Conrad Prebys, who said music was his passion and who, along with his partner, Debbie Turner, donated the bulk of the $83 million for the new center 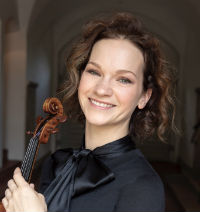 Almost like a dream after perfect hospitality at the beverage bars and splendid food tables, on this most beautifully designed and acoustically perfect stage, appeared world-renowned violinist Hilary Hahn in solo performances of Bach, giving opening passion to an 80-minute unforgettable evening.

Patrons were then treated to an electronic ukulele performance of Schubert and Queen compositions by Jake Shimabukuro, the great Hawaiian recording artist. This was followed by an amazing dance performance by Lil Buck in “The Swan” from Saint-Saens’ “Carnival of the Animals.” The dancer was accompanied by brilliant pianist and the society’s new SummerFest director Inon Barnatan and cellist Joshua Gindele.

Then Barnatan came back with a rapid-fire portion of a Prokofiev Piano Sonata.

One of the evening’s musical highlights came next with four past directors of SummerFest presenting a quartet from Brahms. This reunion was thrilling to those who have followed the SummerFest concerts over many decades.

Almost before patrons could catch their breath, they were to be amazed by the world premiere of a multi-media Lalo Schifrin violin piece, “Letters to My Father,” starring the society’s beloved Cho-Liang “Jimmy” Lin, accompanied in a computerized big screen production by Osman Koc.

For 18 years Lin had directed SummerFest, but this intriguing premiere was followed by Barnatan, the society’s newest musical leader, jazzing up the new hall with his magic fingers on the ivories, in a dynamic Stravinsky piece. One can barely wait the few months until August when Barnatan takes over as Music Director of SummerFest, recognized around the world as a premier festival.

Also splendid on this opening night was another world class pianist, Jean-Yves Thibaudet, who has produced more than 50 albums, in the Liszt piece “Consolation No. 3.” In total there were 13 delightful musical performances.

The grand finale on Friday night was a Mendelssohn Octet, which included the earlier string performers plus the famous Miro Quartet. As an encore, 18 musicians from San Diego and international youth orchestras joined in to perform a lovely version of “Somewhere Over the Rainbow.”

Now this, and many other musical productions, will delight audiences in the society’s own venue. The Conrad came to fruition over the past several years under the architectural brilliance of the New England-based Epstein Joslin Architects, with perfect sound design by Yasuhisa Toyota—the president of Nagata Acoustics America.

On Saturday night, as the opening events continued, the multi-platinum singer-songwriter Seal held forth. Then on Sunday, the other major venue at The Conrad — JAI, named for donors Joan and Irwin Jacobs — was the scene of jazz from New York’s eight-member ensemble, The Hot Sardines, who perform under the influence of early 20th Century swing and blues.

Those in attendance through the culmination of the three-night grand opening weekend concerts will be grateful for many more world-class productions, beginning Tuesday with The Jerusalem Quartet, known around the world for classical music brilliance.

Barry Jagoda, an award-winning broadcast journalist, was special assistant to President Carter for media and public affairs. He is a 1967 graduate of Columbia Graduate School of Journalism and lives in La Jolla.