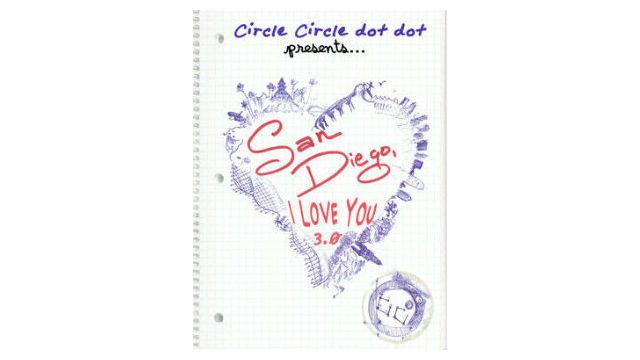 It’s a big week for site-specific theater, on a large and small scale. The Big One is “The Grift,” which takes the La Jolla Playhouse on the road (as in 2013’s fun, immersive mystery, “Accomplice: San Diego”), this time, at the Lafayette Hotel.

On the modest end, there’s Circle Circle dot dot’s third incarnation of its roving romance (a “walking performance”), “San Diego, I Love You 3.0.” The first year was delightful, taking us from Hillcrest café to bookstore to back alley, chasing and charting the relationship of one couple embodied in ever-changing duos, straight and gay.

This year finds C2d2 at UCSD, in areas of the mushrooming campus that I’d never been to before (starting near the Social Sciences building, ending in front of Rady School of Management). The clever conceit is that, unlike the first two years, there are no guides to shepherd you through the story. This time, we’re told, “you’re on your own.” But we follow the bouncing backpack. Blue or green packs emblazoned with a heart, are sported by a number of the actors, or they pass them off to other performers, and we rush, en masse, to catch up to them. That’s one of the best ideas in the voyeuristic show (which warns of adult themes and language). Another is interspersing dance performances with the mini-scenes. But the quality throughout is inconsistent, and has an overall amateurish feel.

The story starts outside a classroom. Two young women are waiting for the professor to arrive. He’s late; we learn “the 15-minute rule.” The arguing twosome is in a fading relationship, one being so over-protective and suspicious of the other, she’s sure Lu has the hots for the prof. Another woman lurks, having witnessed the battle royale. After the jealous mate storms off, the two remaining women strike up a conversation. The so-called straight one has a thing for the male T.A. of their shared class, and over the course of about 50 minutes and six scenes (all academically titled), with changing personnel, we follow that doomed, obsessive relationship as well as the growing friendship (and more) of the two women.

The dance segments, two of which are choreographed by Blythe Barton, a marvelous dancer in her own right, don’t add much. The one pas de deux between two of Barton’s company members (Scene 2, ‘Break-up 101’) feels clunky, and begs for musical accompaniment. The third, a supposedly drunken sexual awakening between two female friends (Soroya Rowley and Alexandra Slade), seems like extemporaneous social dancing (West coast swing, waltz) of the not-so-skillful sort. Speaking of spontaneous, the second so-called dance number has Brittany Allen twirling, swinging her hair, and talking on the phone.

Caitlin Ross and Kyle Lord are compelling in the squirm-inducing boy-girl breakup scene entitled ‘A Minor in Obsession.’ The first scene works, too, and the last; Rowley and Slade are better at acting than dancing. Much of the dialogue (the piece is written and directed by C2d2 founding artistic director Katherine Harroff) is quite credible; some is amusing.

Mostly, the show provides an opportunity to stroll around a section of the campus and, as always with romances (of the good and the not-so-healthy kind), it’s an excellent time to take stock of your own relationship. This is, after all, the V-D month of love.