Beware the Ives of March!

It’s been a great season for playwright David Ives. Last month kicked off with North Coast Repertory Theatre’s hilariously over-the-top, heavily-wigged and period-costumed production of “The School for Lies,” Ives’ 2011 verse adaptation of Molière’s 1666 farce, “The Misanthrope.” And March went out like a lion, Ives-wise, with the opening of “The Liar” at Scripps Ranch Theatre, a “translaptation’ (translation/adaptation), as the ingenious wordsmith calls his creations, of another 17th century farce, Pierre Corneille’s “Le Menteur.” 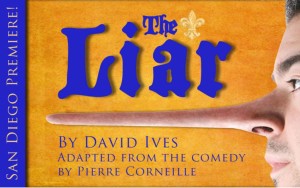 Mendacity abounds; compulsive liars are juxtaposed with helpless truth-tellers in both silly-plotted plays. In “The Liar,” the elaborate confabulations get more extreme by the minute, as Dorante (who believes that ‘the unimagined life is not worth living”) self-aggrandizes to his friend, his valet, his father and his next potential lover (though, in a confusion of names and voices, she turns out not to be the one he thought he was wooing. The mousy one triumphs!). Actually, once all the identities are straightened out (there’s a pair of identical twins, natch), nearly everyone winds up happily paired off.

The delight here is less in the goofy narrative arc than the neck-snapping linguistic journey: a gut-busting array of unpredictable and at times, inexcusable rhymes (‘Dante’s’ and ‘panties’; ‘honest’ and ‘Adonis’ –  Really?), but the double entendres are riotous and the crackerjack delivery makes the 2½ hours fly by.

Ryan Andrews is the titular centerpiece, and he’s a commanding, charming and charismatic presence. Steve Smith is equally irresistible as Cliton, the compulsively honest manservant. As the desirable and clever cousins, Taliesen Rose and Rhianna Basore sparkle, the latter, once she lets her hair down (and flings off her spinsterish glasses) gives as good as she gets – and gets the guy. Tim West does a terrific turn as Dorante’s father, who’s easily duped at first, but thankfully, is less bumbling and clueless than most older men in French farce. Danae Steele is a hoot as the twins, one proper, the other promiscuous. Steve Hohman and Jarret Addleman round out the cast.

Ace director Robert May keeps the pace deliciously nimble, and the physical comedy is impressive, especially in a duel-to-the-death performed sans weaponry, in pantomime (fight choreography by Lance Smith). The set (Andy Scrimger) is simple and serviceable, and the lighting (Michael Barahura) and sound (Ted Leib) complement it well. But the costumes (Jacinda Johnston-Fischer) are a mishmash of periods and styles, ranging from doublets to spats to a skin-tight sheath.

This is undeniably a fun and funny production – and that’s no lie.

“The Liar” plays through April 27, at the Legler Benbough Theatre, on the campus of Alliant University.

Performances are Friday-Saturday at 8 p.m., Sunday at 2 p.m.