They show up at county meetings. They post calls to action on Instagram. In the age of coronavirus, they organize car caravans and Facebook town halls.

For Crisantema Gallardo, the 29-year-old director of Central Valley youth organizing group 99Rootz, years of groundwork are coming to a head with a high-stakes battle over how to dig California out of a sudden $54 billion deficit. Her goal: tax the state’s millionaires and commercial landlords, then reinvest the cash in communities like hers.

“It’s the cool thing right now to be talking about budgets,” Gallardo said in a video interview from Atwater, where she was raised by undocumented parents who worked in the fields.

Gallardo’s group is fueled by outsider energy and, of late, first-hand knowledge of communities ravaged by the pandemic. But 99Rootz has also joined a coalition of powerful labor unions and other left-leaning groups, the United Front, in campaigning for a new 1%-3.5% millionaire tax proposal, AB 1253, plus this fall’s “split roll” ballot measure to raise taxes on commercial property, Prop 15.

It’s a nightmare scenario for the state’s Republican minority and business groups, which have already added the proposals to lists of “job killers” and issued familiar warnings that rich Californians will simply leave for lower-tax states. But other Democrats also oppose the new wealth tax — let alone multiple new taxes — amid a recession expected to drag on until at least 2023.

They argue that labor unions stand to disproportionately benefit from new taxes, and that the state’s already tenuous budget could be further derailed by major financial reforms. “We have an expression in campaign politics, which is pigs get fat and hogs go to slaughter,” said David Townsend, a Sacramento political consultant who runs a business-backed political action committee that works to elect Democrats. “You’re getting a little greedy when you’re trying to tax everything that moves for your own personal interest.”

Much like the national Democratic party’s divide along Biden and Bernie lines, there is broad agreement among California Democrats about things that are bad — record unemployment, unaffordable housing, police brutality — but stark disagreement about what to do next. A group of moderate Democrats led by Senate Majority Leader Bob Hertzberg has proposed a $100 billion stimulus package with no new taxes, instead relying on federal loans, complex financial mechanisms and vouchers that encourage taxpayers to pay taxes early. A formal bill with detailed revenue projections is yet to be introduced.

“We have to be smart about how we fund government,” Hertzberg said during a Monday hearing on the proposed millionaire tax. “The way we’re doing it now is causing unnecessary problems, causing unnecessary tension among parties, isn’t really solving the underlying architecture of what we’re trying to do.”

In the middle of it all is Gov. Gavin Newsom, who has yet to show his cards on a preferred plan to dig the state out of its deep financial hole. The Legislature passed a $200 billion budget this spring that was heavily contingent on federal reimbursement, which remains an uncertain prospect given President Donald Trump’s frequent political attacks on California’s liberal cities. 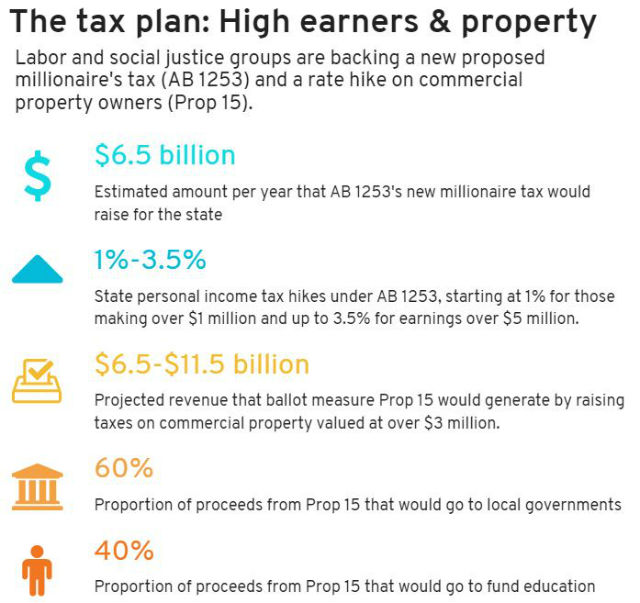 For 19-year-old Eugene Vang, the son of Hmong refugees in Merced County and a biology student at UC San Diego, the political calculus pales in comparison to concerns at home. He cares about state funding because he thinks it should be deployed to help stave off evictions, or provide health care during the pandemic to friends and family who work in grocery stores, Amazon warehouses and the Central Valley’s vast farm lands.

“Why we’re so passionate is because we’re living it,” said Vang, who started organizing fellow teenagers with 99Rootz three years ago. “We’re not asking for too much.”

Even skeptics of aggressive financial reforms have developed common refrains about California’s slow-burning inequality crisis: “Our economy isn’t working for everyone,” state Controller Betty Yee said at a finance committee hearing this week. “We know that people aren’t left behind in society, they start behind in society,” Newsom said at a recent press conference on racial inequality. Metaphors about rising tides and how many boats are or aren’t lifted have figured prominently in state economic forecasts for years.

What’s different now is that the coronavirus and its swift economic fallout, plus simmering state and national uprisings against racism, have given new visibility to financial policy ideas that once may have seemed completely impossible.

The author of the millionaire tax bill, Los Angeles Democrat Miguel Santiago, is also backing a bill to create a state public bank, AB 310. Another measure winding through the Legislature, AB 398, would tax employers with more than 500 employees $275 per worker — a “head tax” modeled after places like Seattle, which are asking corporations to pay more for side effects of rapid job growth including unaffordable housing.

Looming large in conversations about where to go from here on revenue are the financial scars of the Great Recession, when several California cities went bankrupt and the state’s credit was downgraded. Now, moderates argue that new income and property taxes that go up and down with the economy undercut the state’s financial stability, and that ideas like a state public bank are unproven. Many of California’s billionaires have gotten richer during the pandemic, but advocates debate how risky it is to implement new taxes and potentially chill spending with businesses already struggling.

The new millionaire tax bill was “a surprise to many” this late in a legislative year scheduled to end Aug. 31, said Peter Blocker, vice president of policy for the California Taxpayers Association, at the hearing on the measure this week. He warned that millionaires are “not monolithic” and that many have lost money during the recession, which could make it difficult to pay permanent higher taxes, and to pay them retroactively as called for in the bill.

But Emmanuel Saez of UC Berkeley’s Center for Equitable Growth said at the same hearing that any “instinctive move to austerity measures” could be more harmful long-term. Voters have approved past temporary taxes on high earners, including 2012’s Proposition 30 to fund education. He favored raising taxes now to fund areas that will pay off later, and was skeptical of threats that high earners will move out of state.

“We are still far from a tipping point,” Saez said. “It is more fruitful economically to protect education in California, which creates tomorrow’s income.”

In the Central Valley, Gallardo and Vang have already seen the political landscape change dramatically in recent years, from when it wasn’t possible to make a living as an activist to sustained battles over clean water, evictions and now, how to cope with several crises at once. The WiFi they rely on to organize is still spotty, but Vang has been thinking lately about his offline future — specifically, running for office.

CalMatters is a public interest journalism venture committed to explaining how California’s state Capitol works and why it matters.