Income inequality in San Diego County continues to increase, despite some of the lowest unemployment numbers since the late 1990s.

That finding comes from an inewsource analysis of the Gini index, which is tracked by the U.S. Census Bureau and measures how evenly incomes are distributed in an area. The index is a number between zero and one, with a higher number equating to higher income inequality.

“A rising tide isn’t lifting all boats,” said Peter Brownell, research director at the Center on Policy Initiatives, a San Diego nonprofit that advocates on behalf of the working poor. “It’s actually leaving behind most of the boats.”

At the same time income inequality was increasing, unemployment was dropping from more than 10 percent during most of 2011 to 4.1 percent in December 2016. Normally those job gains would translate to higher wages, but not this time, Brownell said.

“People that are doing whatever the work is to create the gross domestic product, they’re not getting a growing share of the income that that work creates,” Brownell said. “It’s going to other folks, whether those are shareholders or managers, business owners.”

Rising housing costs can also exacerbate income inequality trends, which can then affect other parts of the economy.

In 2017, the cost to buy a house or to rent a home in San Diego County continued an upward trend. The median price of a single-family house was $540,000 in November, a 9.1 percent annual increase, according to real estate tracker CoreLogic. The average monthly rent hit a record high of $1,875 in September, according to MarketPointe Realty Advisors, which has tracked the figures since 1988.

“The vast majority of the population increasingly don’t have any money left over after paying their rent,” Brownell said. “Those are the same people that are shopping in our malls.”

To analyze income inequality in the county, inewsource used two, five-year American Community Surveys from the Census Bureau — one  from 2007 to 2011 and the other from 2012 to 2016. Using the five-year averages results in more reliable data. 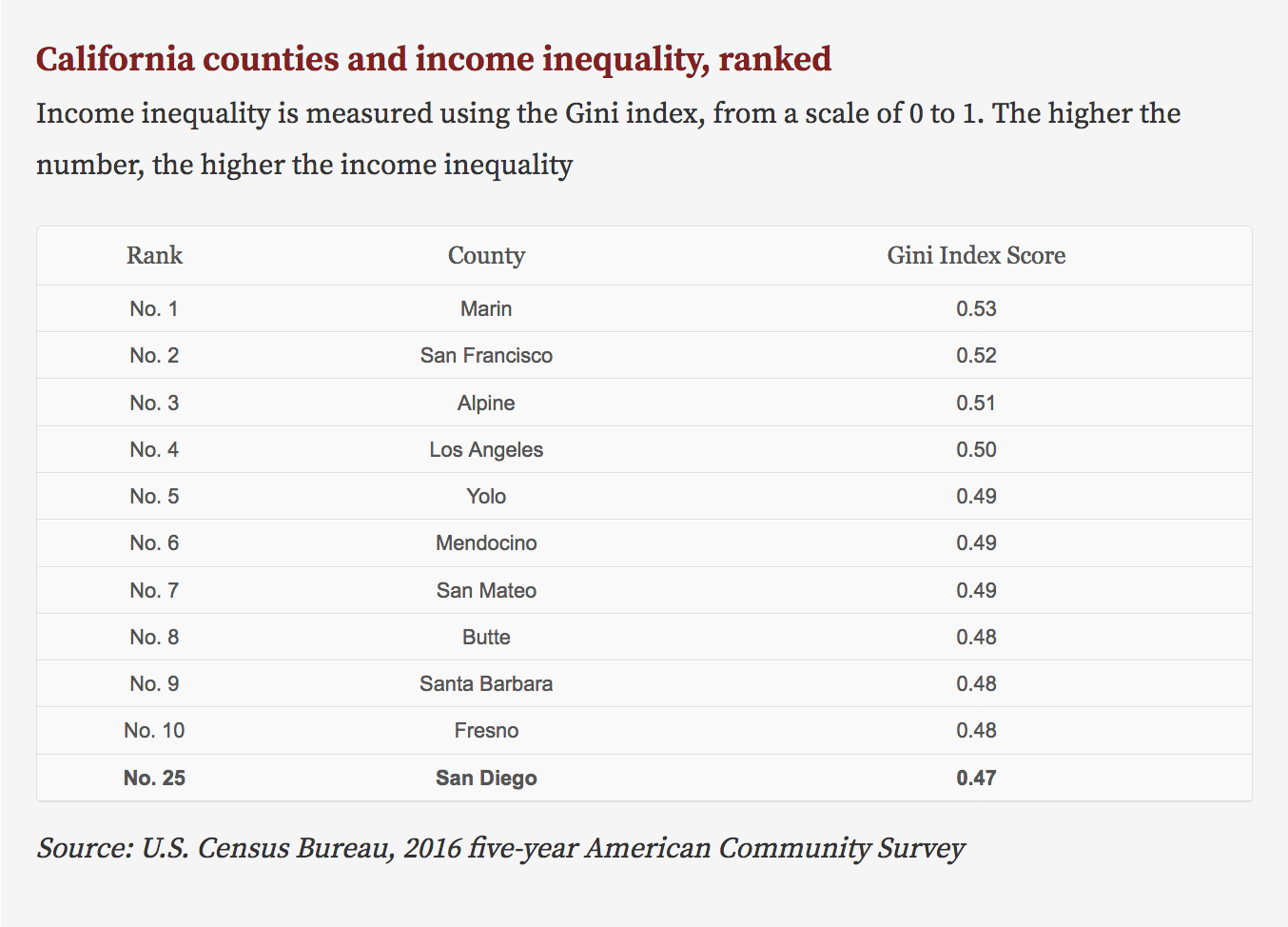 That analysis showed the increase in income inequality is widespread in San Diego County. Of the 98 ZIP codes in the region for which data was available, 67 saw an increase in inequality. Thirty-one ZIP codes saw a decrease.

Among the large ZIP codes — those with at least 10,000 residents — the biggest increase in inequality was a 19 percent uptick in 91915, which includes part of Eastlake in eastern Chula Vista. The biggest decline was a 10 percent drop in 92116, which covers Normal Heights in central San Diego.

Brownell said that despite the current increase in inequality, he sees some positive changes that could start to reverse the trend. In particular, he points to California’s decision to steadily increase its minimum wage, which will reach $15 an hour in 2022 for larger businesses that have 26 or more employees.

In November, unemployment in the county reached 3.3 percent, the lowest it’s been since December 2000.