As a successful San Diego player in marketing communications, Scott McGaugh oversaw the public relations needs of dozens of disparate clients. He might have gone on in that profession, save for circumstances that, a decade or so ago, earned him the marketing director job at the USS Midway Museum — the most-visited naval ship museum in the world and America’s 7th most popular.

There, introduced to the military environment, and the dramatic devotion and deeds our servicemen and women experience in protecting our country, McGaugh was driven to report it and write about it, inspiring us with his own attention and admiration over the course of his eight acclaimed books.

We talked about “Honor Before Glory: The Epic World War II Story of the Japanese American GIs Who Rescued the Lost Battalion” and the experience of those young soldiers whose parents were interned in camps and denied basic freedoms. 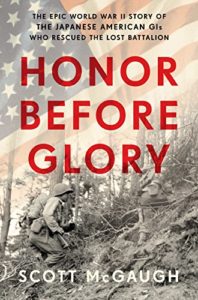 More and more, World War II recedes from our memory, experience. It’s ancient history to high schoolers, even college attendees. (Incredibly, there are grandparents today who have no personal recollection of Vietnam.) You must have a mission of sorts to keep our history alive?

I suppose my mission is more about honoring and preserving the legacy of those who serve our country in uniform. An estimated 58 million Americans have done so, perhaps epitomized by the 16 million who served in World War II. Many of those WWII vets have told me that they were simply “at that place at that time.” And…that every generation has stepped forward when its nation has called. In that respect the Greatest Generation was no different from the others.

My day job aboard the USS Midway Museum is much the same. Although we focus on naval aviation, in truth, every day is Veterans Day aboard the Midway. Nearly 1.4 million people from around the world visited Midway in 2016, largely to share in the legacy of American service in uniform.

Clearly, the Midway influences and inspires you, and  draws you to military themes in your eight books.

My involvement with Midway began in 1996 as a volunteer leading the public relations campaign. Back then, I decided to write the first book on Midway’s 47-year odyssey. When I discovered extraordinary acts of courage by otherwise anonymous sailors, it led to my other books showcasing other heroic Americans in uniform — from the contributions of military medicine to the legacy of Japanese Americans in World War II.

I never started out as a military-history writer! But the best of the American spirit often surfaces on the battlefield or while standing a lonely post. That ought to be honored and preserved.

Your recounting of the young Japanese American soldiers of the 442nd — the segregated infantry unit exhaustively, dramatically and sensitively explored in “Honor Before Glory” — could not be more gripping. How did you discover their story?

I learned of the 442nd when writing “Battlefield Angels, Saving Lives from Valley Forge to Afghanistan.” That book reveals how much of the healthcare that you and I count on today was pioneered on the battlefield — from blood transfusions to penicillin to life flights. In that book, I profiled a 442nd medic, and realized the 442nd deserved bigger treatment. After writing, “Surgeon in Blue: Jonathan Letterman, the Civil War Doctor Who Pioneered Battlefield Care,” I returned to the 442nd. “Honor Before Glory” is the result.

Why do you think these young men volunteered to fight? Their families were imprisoned in internment camps, denied the very freedom for which they were laying down their lives.

These men had several motivations. Like other Americans, they stepped forward to serve their country. But for many, it also was to show that they were as American as their Caucasian neighbors who weren’t sent to internment camps. Owing to their culture, there also was a powerful force of honoring their families. For most, their families had stoically accepted internment only because of the color of their skin. An estimated 120,000 were sent to these camps! Then, incredibly, 10,000 Japanese Americans from Hawaii volunteered. Volunteering or obeying a draft notice was a powerful way for young men to honor their families who already were sacrificing so much in their own way.

I presume you have not had very many still-living participants to meet, to interview. How did you research their 442nd experiences and their lives after the war?

In the last 10 years, hundreds of World War II veterans have finally recorded their oral histories. The time finally came to share. The Go For Broke National Education Center had more than 100 oral histories from the men of the 442nd that had never been seen before—a rich history told by the men who endured…and a history that begged for a book to be written.

Many of these soldiers were eventually — in the 1990’s! — awarded more than 9,000 purple hearts, 6,000 Bronze and Silver Stars, nearly two dozen Medals of Honor – and more. Among the soldiers you were able to interview, and their families, how did that recognition inspire the rest of their lives? Why did it  take so long?

Regrettably, our society was not ready to recognize ethnic heroes! That was reserved for white people. Incredibly, it wasn’t until the 1990s that our nation was ready to accept these men on a par with Caucasian heroes. A Pentagon review of the record was conducted and nearly two dozen awards were upgraded to the Medal of Honor. Many of the recipients had already passed away.

Of the 200+ American soldiers surrounded by German infantry in France’s Vosges Mountains, how many were saved by the 442nd — and how did the experience change their view of Japanese Americans after the war?

Of the 275 initially surrounded, the 442nd rescued all 211 who were still alive when the Japanese Americans reached them. Those who were rescued were, of course, deeply grateful…just as nearly all American soldiers were who crossed paths with the 442nd. The 442nd became the most-decorated unit of its size in WWII: more than 18,000 individual awards for bravery earned by 18,100 men. America’s troops came home extolling the legacy of the 442nd. Unfortunately, not all of America back home was willing to listen.

Presumably, there’s no shortage of American military dramas that draw you to pen. What’s next on your list?

I’ve just been asked to write about how World War II changed San Diego forever. It’s amazing to see how much of the city we know today owes its existence to World War II — from Linda Vista to Highway 163 to the Navy’s presence to enormous classified research and development programs. Thanks to World War II, San Diego has become America’s largest Navy/military R&D/veterans homeport. I’m thinking maybe that’s the next part of the American mosaic that merits some attention.