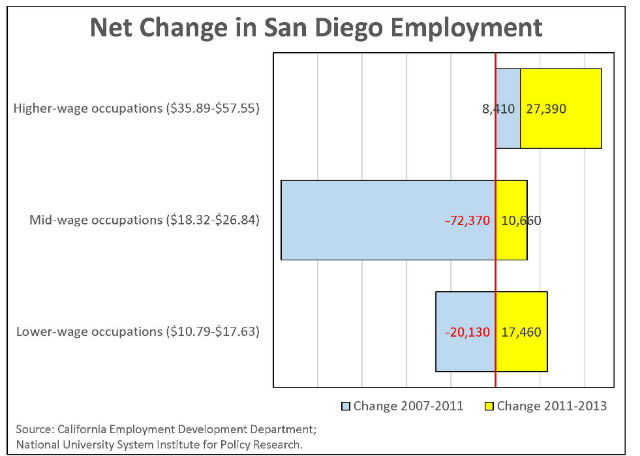 Recovering from the 2008-09 recession has been prolonged and challenging. San Diego’s struggle in recovery was not broad based or spread evenly across all economic sectors.

Sectors of the local economy that rebounded and continued growing are being led by professional and business services, health care, private education, finance, and even manufacturing. Growth among these industries was enough to pull San Diego’s overall economy out of recession and onto record levels of production.

Job changes tend to lag economic movements. Whereas San Diego’s economic output had stopped falling by 2010 and was fully recovered by 2012, employment continued dropping until 2011 and only recovered pre-recession levels by March 2014.

Similarly, employment was mixed with widely varying patterns of recovery within the region’s economic landscape. Employment in health care never faltered and continued growing throughout the recession. Professional, business and financial services lost relatively few jobs in recession, and grew far beyond in recovery.

Higher-wage occupations encompass skilled positions usually requiring significant technical expertise in specialized fields of computers, engineering, healthcare, legal, business and finance. In total, higher-wage occupations accounted for 23 percent of all San Diego jobs in 2007, as of 2013 they now account for more than 26 percent.

Most jobs lost in San Diego during the recession were, by far, mid-wage occupations. These positions are mostly in construction, sales, office and administrative support and education. Altogether mid-wage employment dropped 11.3 percent between 2007 and 2011. Since that point, only 1.9 percent of these jobs have recovered and remain 9.7 percent lower than before the recession began.

The recession hastened changes already ongoing in San Diego. Blue collar or mid-level work has been disappearing in San Diego since at least the early 1990s when aerospace and other manufacturing jobs departed from the region. The 2008-09 housing recession resulted in further losses of mid-wage jobs most prominently in construction, followed by sales, office and administrative positions.

With San Diego businesses and industry shifting towards more industries requiring greater skills and technical abilities, it becomes critically important for the local labor force to be well educated, trained and prepared for this work. High school education is not enough for most higher-wage jobs and students must be prepared to advance learning with additional levels of instruction and training.

As John Mace, of Mace Instruction and Design, says, “Adult education must be academic and professional in order to be effective in preparing students for a 21st century working environment…In America products and services are expected to be of the best quality possible. The same should be true in American higher education instruction, instructing and instructors.”

Ladders to higher-wage professions are critical for the local labor force to fill these positions. Otherwise San Diego residents risk being left behind in their own communities.

Kelly Cunningham is an economist and senior fellow at the National University System Institute for Policy Research.