An excessive heat warning for the deserts will remain in effect until 9 p.m. Monday, and a less severe heat advisory for the valleys and mountains will run from 10 a.m. to 9 p.m. Sunday.

A National Weather Service excessive heat warning for the deserts will remain in effect until 9 p.m. Monday. A less severe heat advisory for the valleys and mountains will run from 10 a.m. Sunday until 9 that night. 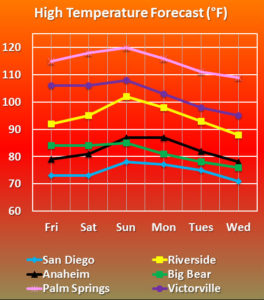 “Excessive heat will continue through the weekend and through Monday in the lower deserts,” according to the weather service. “On Sunday it will become hot across the Inland Empire, the mountains below 5,000 feet, and the inland valleys of San Diego County.”

High temperatures in the deserts are expected to hover around 115 degrees Saturday, then range from 115 to 120 degrees Sunday and 112 to 118 degrees Monday. On Sunday, highs of 95 to 102 degrees are in the forecast for the valleys and mountains.

The immediate coast was spared from the extreme heat, but those headed to the beaches will have to contend with strong and potentially dangerous rip and longshore currents. A beach hazards statement will remain in effect through Saturday evening.

The hot weather will increase the risk of heat-related illness and anyone working or spending time outdoors would be more susceptible, as will the elderly, children and those unaccustomed to the heat. Forecasters advised residents to reschedule strenuous activities to early morning or evening, drink plenty of water, wear lightweight and loose fitting clothing and be aware of the signs and symptoms of heat exhaustion and heat stroke.

Authorities have also warned against leaving children, seniors or pets in parked cars, which can heat up to lethal levels in just minutes, even with a window partially open.