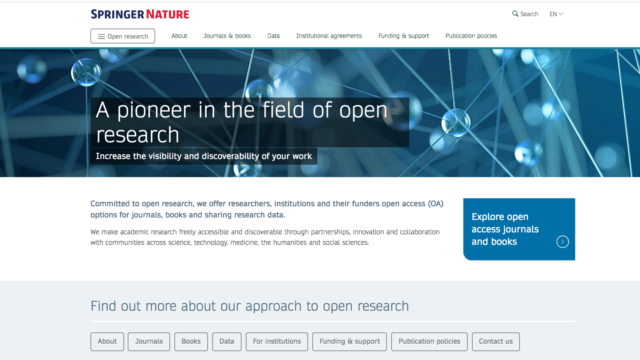 The University of California, whose 10 campuses include UC San Diego, announced Tuesday an open-access agreement with a publisher that will make more of the UC system’s research freely and immediately available across the globe.

Under the agreement, all articles with a UC corresponding author published in more than 2,700 of Springer Nature’s journals will be open access by default.

“During my years leading the University of California, I have fervently supported expanding knowledge through various avenues, including access to research,” said UC President Janet Napolitano. “Now, more than ever, as we seek to better understand and combat COVID-19, it is abundantly clear why researchers need immediate, unfettered access to each other’s work to spur new discoveries and make timely advancements in health care.”

UC accounts for nearly 10% of all United States publishing output, and Springer Nature is the world’s second-largest publisher of scholarly research.

The largest such agreement in North America to date, and the first for Springer Nature in the U.S., signals increasing global momentum and support for the open-access movement. The aim is to get research into the hands of scholars and the public to help solve the world’s most pressing problems, including those in the critically important fields of medicine and health care, according to UC officials.

The four-year agreement also gives UC students, faculty and researchers access to more than 1,000 journals that UC did not subscribe to previously. The UC system has been spending about $50 million annually on subscriptions to scholarly journals, which is “extraordinarily expensive,” said UC Berkeley University Librarian Jeffrey MacKie-Mason, co-chair of the UC negotiating team.

“The faster people can see science happening, the faster they can make new discoveries, be more collaborative and cooperative as scientists, economists and engineers, and the faster they can learn and make more advancements, including to benefit developing countries,” MacKie-Mason said.